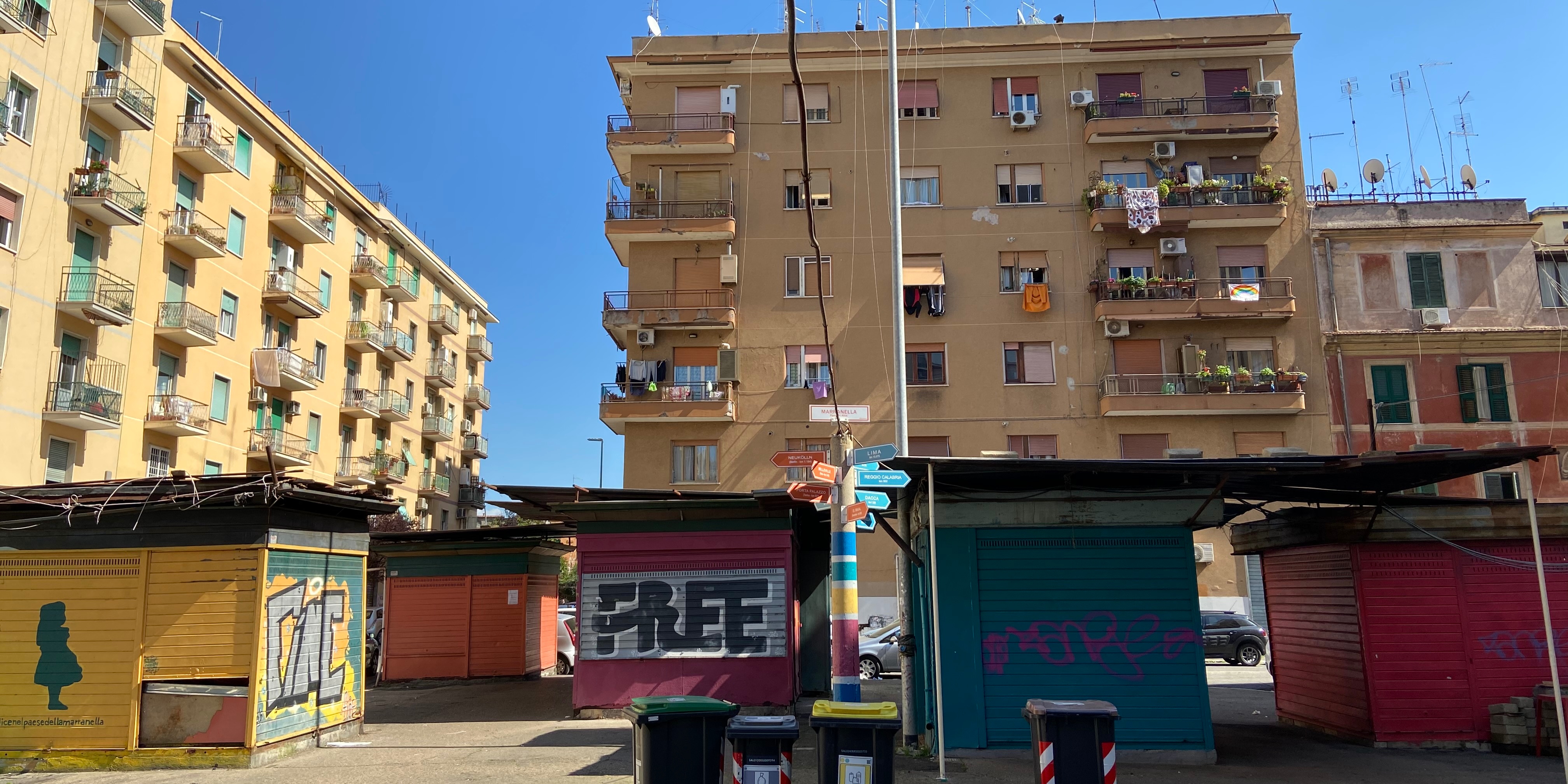 In a few days shops have been closed and streets have become empty. Yesterday the governement announced tougher measures, closing finally all the economic activities which are not “strategic”. Many are even calling for the army to control the streets, which is in fact starting to happen. The contagion has not stopped. From the beginning of the epidemic to the 21th of March in Italy 42,821 people have been infected and 4,825 have died. On the 21th of March 793 people died

LIFE AND DEATH IN ISOLATION

About two weeks after the decree that turned Italy into one big red zone, isolation is growing. The reasons and opportunities to go out are increasingly less. More activities have been shut down. Supermarkets have shorter shifts. Parks have been closed. Police control is increasing everywhere.

According to official numbers 1,650,644 persons have been stopped from the police from the 11th to the 20th of March. 70,973 have been reported and risk 3 months of jail and a 203 euro fine for not having respected the orders of the authority. The minister of the Interior Luciana Lamorgese on Wednesday said that “everyone should become the controller of him/herself”. Actually it seems that many have already gone further: there are those who spend their quarantine shouting at people jogging in the streets; or taking photographs of couples walking hand in hand; those who call the cops when they see a small group of people chatting on the sidewalk; or who spend their time commenting on Facebook “we need the army, we need the army”.

On Tuesday a study carried out in the region of Lombardia, the epicentre of the outbreak, that used the data of mobile phones, found that 40% of people are still moving. But nobody is able to say if they are still going to work, and in that case if their work is necessary or not, or if they are simply out for a walk. Many owners do not want to stop their factories and companies. On Wednesday the president of the region Attilio Fontana (Lega) spoke with Chinese doctors here to help. The doctors said they were surprised to see so many people still in the streets. Fontana, who a few weeks ago had defined the Chinese “live mouse eaters”, claimed that this was the demonstration that we need harsher measures to prevent people from going out. And actually they came. In some regions, as Lombardia, they limited even more the possibilities for the people to go out.

Above all, yesterday night at 11 pm the Prime Minister Antonio Conte spoke to the country and announced the lockdown of all the economic activities not considered strategic. This happened after a long meeting with Confindustria (General Confederation of Italian Industry) and the main trade unions. The first was against the closing of factories and production sites until yesterday, when it announced that it would agree to following the indications of the scientific authorities. The latter were forced to ask this measure by the struggles and the strikes of the workers. Still it is not clear what exactly will be closed.

However, the quarantine is a complete distortion of individual and collective behaviour. Sleep-wake cycles change, how many times you eat and go to the toilet changes, the addiction to social networks and the internet increases. The first weekend of isolation musicians and djs started to organize concerts and parties on Facebook, Instagram and other virtual spaces. Until the copyright algorithm discovered them, they spread music into the isolated homes.

Italian flags can be seen hanging from some balconies, and many cartels painted by children read “everything will be OK”. A rainbow visible above the letters. Very soon flashmobs from the window started. During the first one the national anthem was played from the windows. Many took part, many others put on very different songs: from folk music to antifascist songs. Now in many places at 6 pm people play music on their balcony and many lean out of their windows. It is then that we meet our neighbours, people who have always lived very close but that, in many cases, we have not spoken to before.

As things get tougher downstairs, in the public spaces, people have started to go to the roof to play sport or spend some time outdoors. When it is time for an aperitif human shapes can be seen populating the rooftops of the neighbourhood, drinking something. Everyone respects the one metre distance rule.

In the streets there are no more hugs or handshakes. 90% of people use surgical mask and plastic gloves. Big queues are the rule in front of any supermarket or bakery in big and small cities. On the sidewalk when somebody sees another human being coming closer on the same side of the street the first thought is to avoid him or her, and turn left or to right.

Of course, this is only a part of the scenario. This is how the rearguard is living and trying to survive, also psychologically, to the epidemic and the isolation it has brought. But there is always a front line. It is populated by riders who are loaded with work, who deliver food and stuff from one side to the other of cities. By employees of supermarkets and pharmacies who often work without the necessary protections. Or by the others working and fighting in factories or logistics. Above all, there are those in the trench, battling the virus, the healthcare workers. They are fighting and dying like no one else. 9% of the people ill with Covid-19 are nurses and doctors. In China the percentage was one third.

The worst situation is in the province of Bergamo. In many places there is no more space in the morgues, church bells stopped ringing because they were ringing nonstop, and crematories are unable to handle all the bodies coming in although they are working round the clock. On Wednesday night the army had to take coffins to another province to speed up cremations. 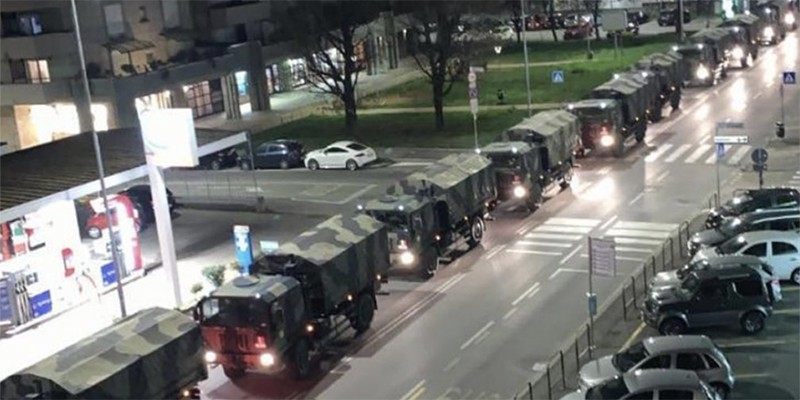 The army take coffins out of the city of Bergamo

Almost immediately social centres, self-managed spaces and grassroots networks started to organize solidarity from below. In different cities they are helping weak and old people to access food, medicines and basic goods without going out. They have organized self-managed and free distributions for people in need. In some places they are also cooking and giving food to homeless and very poor people living in the streets. Of course, also charity organizations are doing the same and more.

NGOs workers started to help the healthcare system continuing to assist marginalized people in informal settlements, above all in the south of Italy or in the largest cities, but also sending their doctors to public hospitals. Doctors without borders (Msf) have done this in the provinces of Lodi, the centre of the epidemic. If the situation were not so dramatic, it might sound ironic. Msf is an NGO active in many places, one of these is central Mediterranean where, together with Sos Mediterranée, they have carried out several missions off the coast of Lybia during the last years, on board the Ocean Viking. For this reason they were harshly attacked and persecuted by different political parties and mainly by the Northern League, that is the party Fontana belongs to, the president of the Lombardia region where the province of Lodi is located.

However, solidarity is important but not enough. The economic situation is getting worse and very dangerous for the people who cannot rely on personal or family savings. It is difficult to think that the quarantine will end the 3rd of April, as was initially said. At the moment it seems impossible. This means that very soon many people will have been one month without work and salary. And still they will have to pay their rent and pay for basic needs.

On Tuesday the government decree with the first economic measures came into force. It allocates 25 billion EUR and hopes to mobilise another 340. These are figures that we have not been hearing for years. Not even during the crisis started in 2008. The reason was the “European fiscal compact” and the prohibition to increase national debt. In the end, it seems that a virus was necessary to derogate from this neoliberal diktat! Thousands of people have lost their lives or have become poor during the last economic crisis in Greece, Italy, Spain and Portugal, and governments did nothing. Now it is becoming very clear to everybody that it would have been possible not to cut public spending in the areas of healthcare, education and social rights.

Also, even though the decree makes available a lot of money, the situation is so catastrophic it will not be enough (in fact, the European Central Bank is preparing to allocate another 750 billion EUR). The problem is not only how much money, but also the kind of the economic measures adopted by the government. After 30 years of cuts in the public healthcare system the 3,5 billions allocated are not enough. Moreover, the extraordinary social safety nets provided by the decree will not support many kinds of workers: domestic workers; those with jobs in the informal economy; off-the-book workers; and so on. Every day it becomes more clear that a universal measure is needed. We call it “quarantine basic income” and we think it must be paid by the owners and the super rich with a property tax. This measure has to be adopted during the epidemic, but it has to continue also after, in order to redistribute money and strengthen our society. Finally, the decree implements some weak measures concerning bills and loans, suspending payments for a few weeks, but it says nothing about rents, that in the main cities are a huge problem for many. 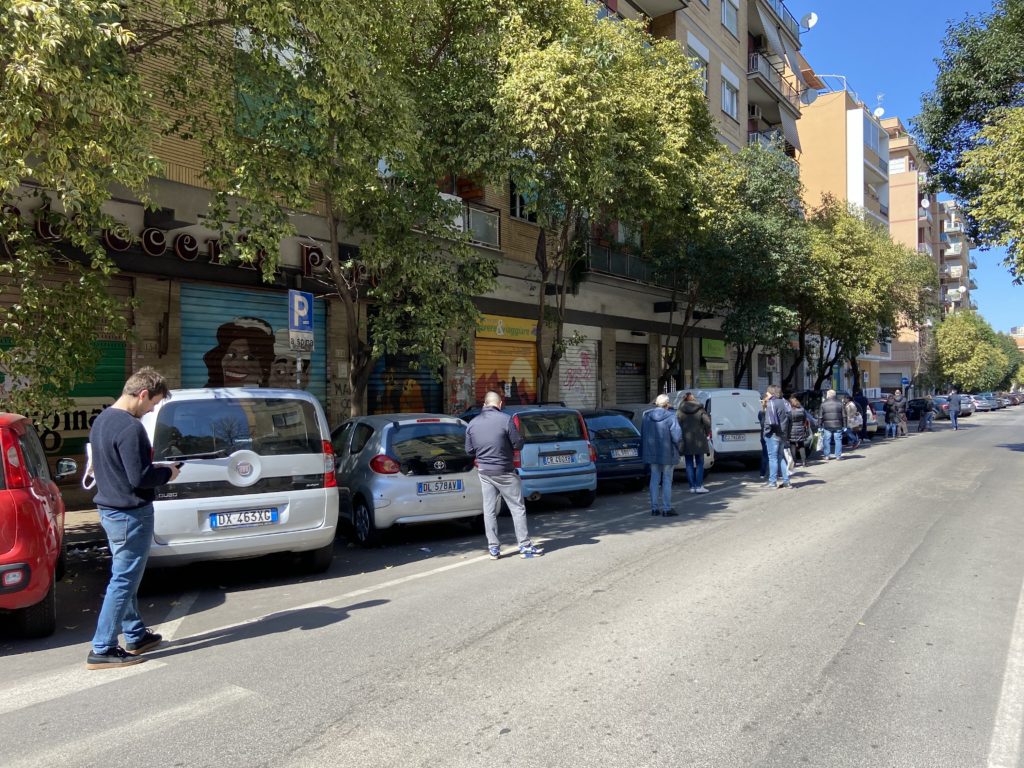 Queue in front of a supermarket, Rome

There is a strange feeling in the air. The virus has a radical “democratic” side. It does not respect the social order that has become stratified over centuries of human history. Of course the effect of the epidemic and the measures to stop it are not the same for everybody, and this fact has to do with class, gender and citizenship. But still, the virus spreads from prisoners to jailers, from cameramen to politicians, from janitors to princes. Without a vaccine or treatment, and even if social and class differences have not disappeared and in many cases have even increased, in some way the virus is putting human beings in front of their existence as species. This creates a feeling of fragility that invests humans and their institutions.

At the same time, there also other kinds of feelings coming to light. The fact is that everything has changed very radically and very quickly. It has changed for everybody. What if the awareness of the possibility of rapid and radical changes shifted from species to class? Things can change. Things can change radically and quickly. This is now clear. At present Italian flags are hanging from balconies and politicians appear in television to thank the workers of the healthcare system, calling them heroes. But what will happen in a while? If the epidemic stops, if a treatment or a vaccine is found, if we achieve “herd immunity”, will the same flag be able to keep together those who slashed the healthcare system for three decades and us, the users and the workers? Will we continue to be all “human beings” when the owners will present the bill for this period and try to make us pay for the crisis? These are open questions, but we must look for possible answers immediately. Starting today. Even from the quarantine or from the workplaces where people are still forced to go to.

Read the first part: To our friends all over the world from the eye of Covid-19 storm 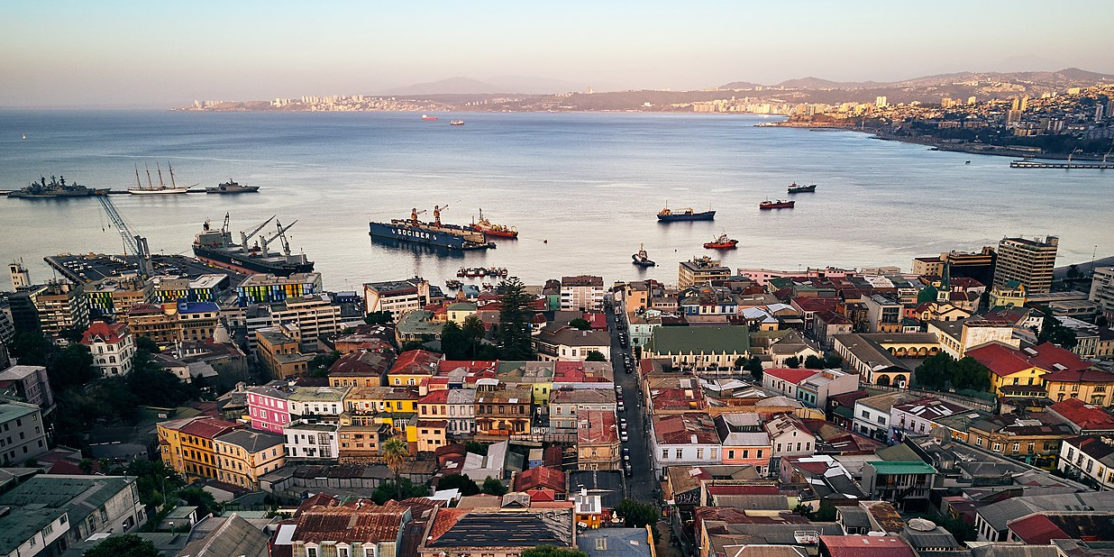 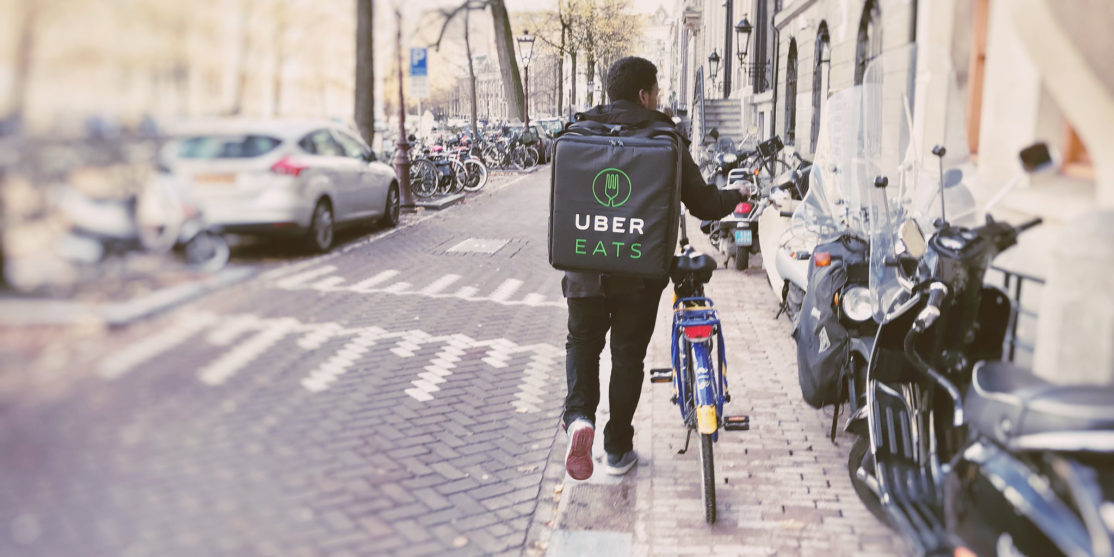 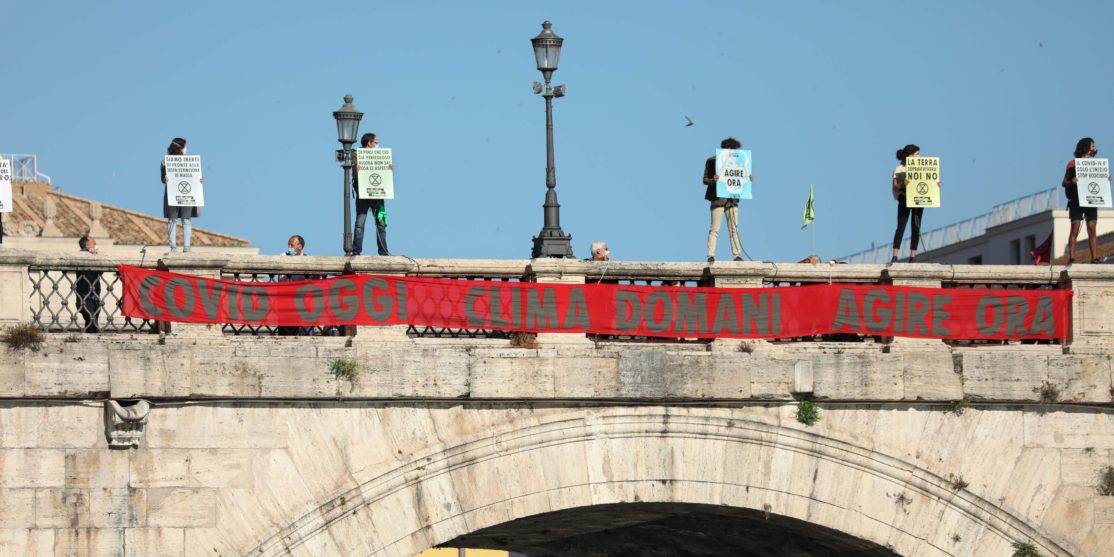 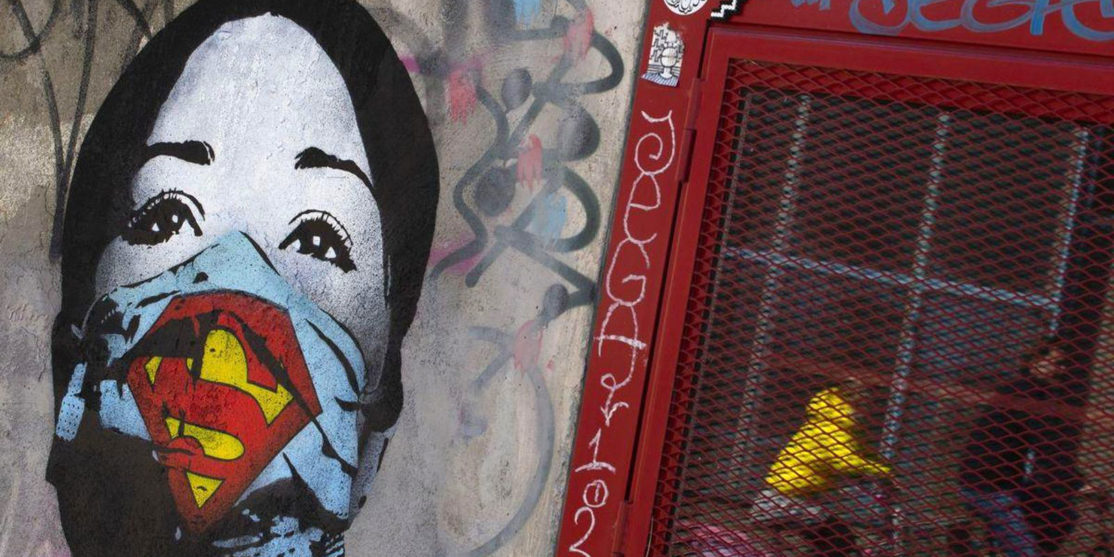 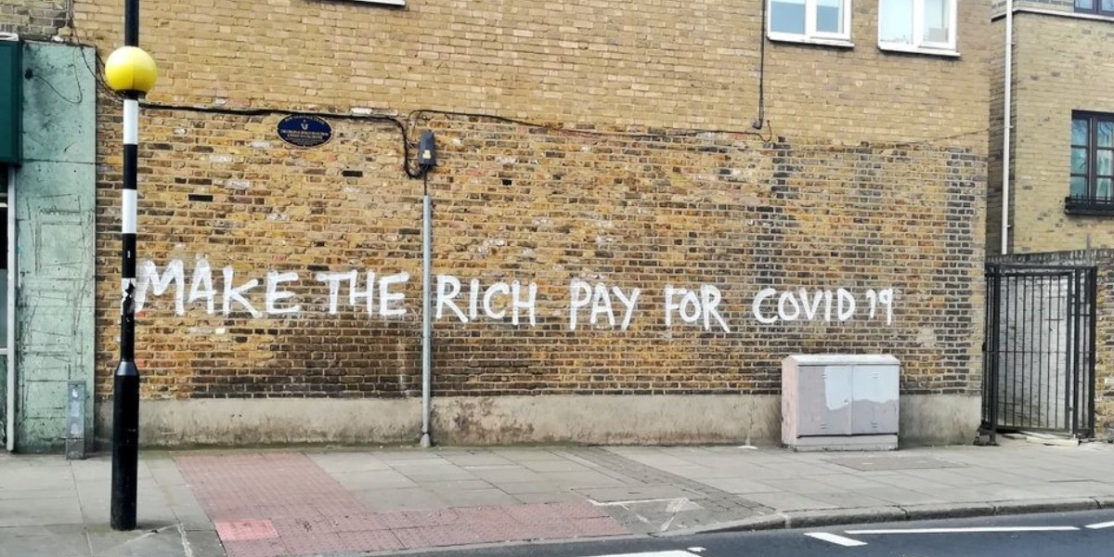 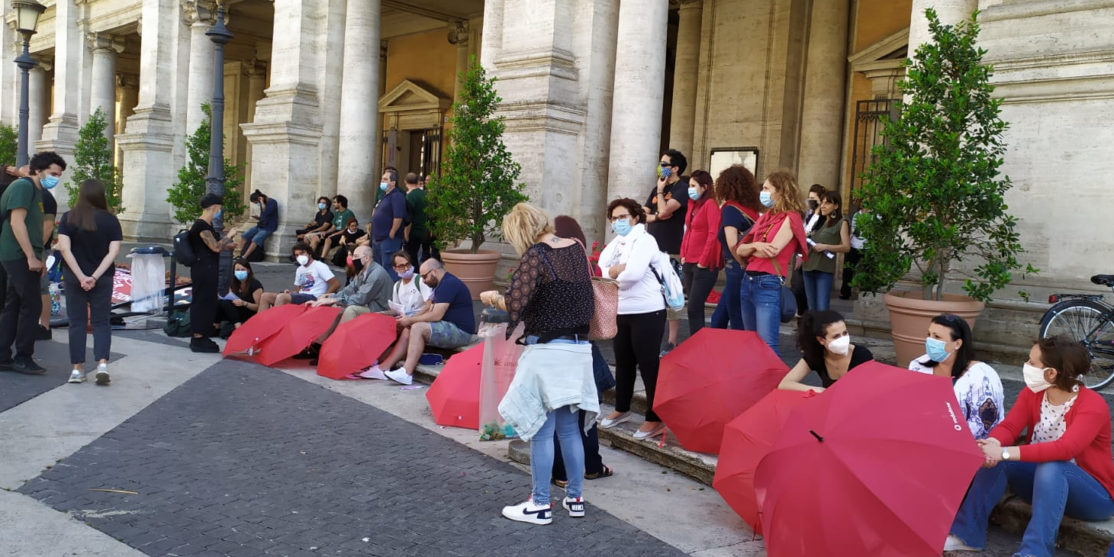